Your experience on this site will be improved by allowing cookies.

Get to know our amazing producers!

Bringing you the best LOCAL products


"I was dabbling with my family's genealogy in 2010, when I discovered that my maternal grandmother's family name was Baker, and that several generations of Bakers had originated from a small village in Oxfordshire that I knew well, as I'd attended craft courses there at the renowned Waterperry Gardens. Sentimentality led me to book their bread making courses, under the tuition of Paul Merry (of Panary in Dorset), and I was hooked! I continued to enjoy making bread at home for family and friends, and in 2016 'dipped my toe' more comercially at the Seil Craft Fair, to which I received encouraging feedback. When it became apparent that I would be made redundant from my full time profession in 2017, I realised that I could give bread my full attention. I secured the short-term loan of half of an old steading on the island and began to have a sealed pod-type structure built inside, to house a bakery workshop. However, I didn't have the finances to purchase a commercial bakery electric oven, & also wondered how many weeks I would have to wait on Seil to get an engineer, if such an oven broke down. Around this time I attended an excellent talk by Andrew Whitley (author of Bread Matters) at the Luing Atlantic Centre and had a 'light bulb' moment when I discovered that he baked his bread in a wood-fired oven. I contacted the workshop where Andrew had had his oven built, and in Spring 2017 my very own half ton wood-fired oven was installed. I've since managed to master the 'beast', and produce bread that has an enhanced and unique flavour. I use only the very best organic flour for my bread, containing the heritage grains that are known to be easier to digest than the more commercial grain used to produce most flour, and with none of the long list of nasty additives and fillers found in supermarket bread. Bread has been our staple food for thousands of years, and stripped back to its original form it should never be more complicated than flour, water, salt and sometimes yeast." 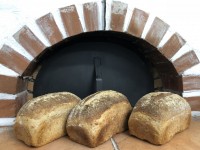 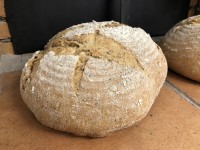 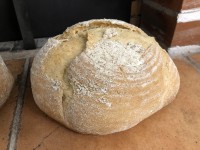 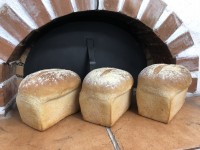 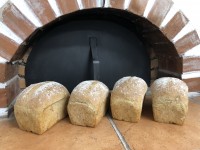 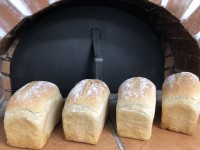 Are you sure you want to delete this record?

Please select at least one record?